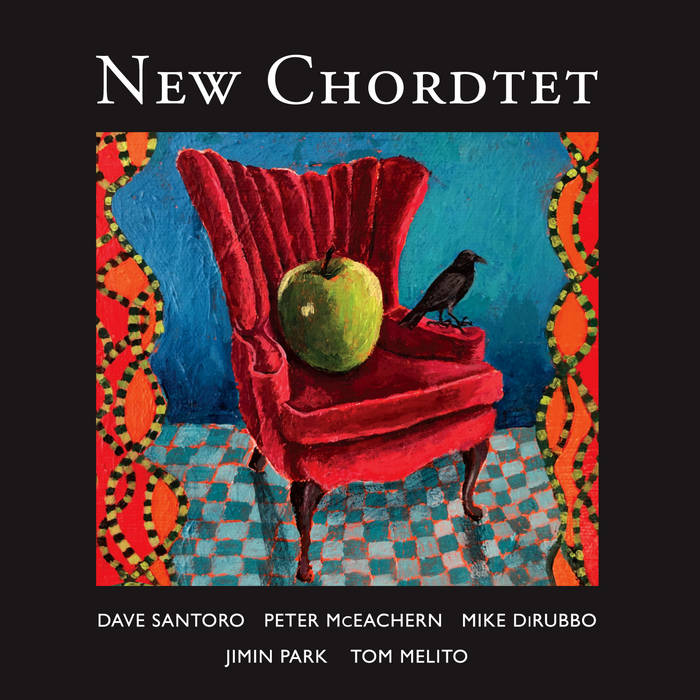 The bright constellation that New Chordtet forms on its debut release has as its most distinctive shape the figure of Lee Morgan, the modern jazz great whose star burned brilliantly for 33 years before it was extinguished by gunshot in 1972. Three of Morgan’s originals, “Tom Cat,” “Riggarmortes,” and “Twice Around,” predominate not only in number on New Chordtet, but in unifying the stylistic parameters of this smartly-programmed album.

New Chordtet began in 2007 as No Chordtet, a quartet established by Peter McEachern and Dave Santoro that grew out of their collaborations as faculty at the Litchfield Jazz Festival Music Camp. The group’s new name is occasioned by the addition of Jimin Park, a phenomenal young pianist from South Korea whom Santoro discovered at Berklee, where he’s taught for twenty years. “Jimin absorbs everything she hears,” he says. “She’s got perfect pitch and she’s attracted to the swingingest players—Wynton Kelly, Red Garland, McCoy Tyner.” McEachern adds, “Jimin can really light it up. Having her in the group changed up our [musical] palette.”

McEachern and Santoro each play a hand in Morgan’s prominence on New Chordtet. McEachern was impressed at hearing “Tom Cat” on the soundtrack of, I Called Him Morgan, the moving documentary about the doomed relationship between the trumpeter and his common-law wife Helen More.

“When I heard ‘Tom Cat,’ I had to write it out,” says the trombonist, whose playing embraces everything from blues and gospel shout to post-hard bop. The modal pulse of his composition, “Native Mode,” was inspired by the documentary Rumble: The Indians Who Rocked the World. And one suspects that what Peter says about the saxophonist Dewey Redman applies equally to himself. “He played inside and out and didn’t seem to be in conflict with either.” Redman’s original, “Joie de Vivre,” embodies the joyous intensity of the late Texan’s music.

For Santoro, whose brightly hued original “Cosmos” opens the album, tunes by Morgan and Wayne Shorter’s “Tom Thumb” were naturals given his extensive experience as a bassist playing straight-ahead jazz. At Berklee, he directs an ensemble class in Shorter’s mid-Sixties work, and another in the Blue Note canon. While emphasizing that the group’s model for “Tom Thumb” was the version Shorter first recorded with Bobby Timmons on Soul Man, Dave says, “I’ve got an ear for these hidden gems from the mainstream.”

Santoro locks in solidly throughout the session with drummer Tom Melito, whom he appreciates as “the ultimate listener. Tom’s the true glue in making any group swing.” Having played hundreds of gigs together over the past thirty years, he knowingly praises the Rochester, NY, native as “the model of consistency.”

Mike DiRubbo, McEachern’s front line partner in New Chordtet, adds more connective tissue to the album’s feeling of homage. As an aspiring saxophonist, the New Haven native studied under Jackie McLean at the University of Hartford. In a recent Downbeat profile, DiRubbo called the iconic JMac, “my first real mentor [and] a shining star the whole way.” Both reedmen have highly recognizable sounds, and McEachern remembers a quality in DiRubbo that was certainly true for McLean, who was a sideman on Tom Cat. “He cut right through the first time I heard him. I fell in love with his sound and his rhythmic intensity.”
New Chordtet invokes the spirit of another alto master and Connecticut legend, Thomas Chapin, who often called “I’ve Got Your Number” as a standards feature. DiRubbo succeeded Chapin in Mario Pavone’s ensemble after Thomas’s death in 1998 at 40. Peter recalls that when Mario called bearing the sad news, “I could hear Thomas playing [the tune] in the background.”

New Chordtet underscores the vitality of the jazz scene in Connecticut. It’s one that surely revolves around McLean’s extraordinary legacy in greater Hartford, but it holds true statewide. And as this album makes plain, Santoro and McEachern are among its most foremost exponents.

Tom Reney has hosted Jazz à la Mode at New England Public Radio since 1984. He was the 2019 winner of the Jazz Journalists Association’s Marian McPartland-Willis Conover Award for Career Excellence in Broadcasting. Read his blog at nepr.net