by The Curtis Brothers 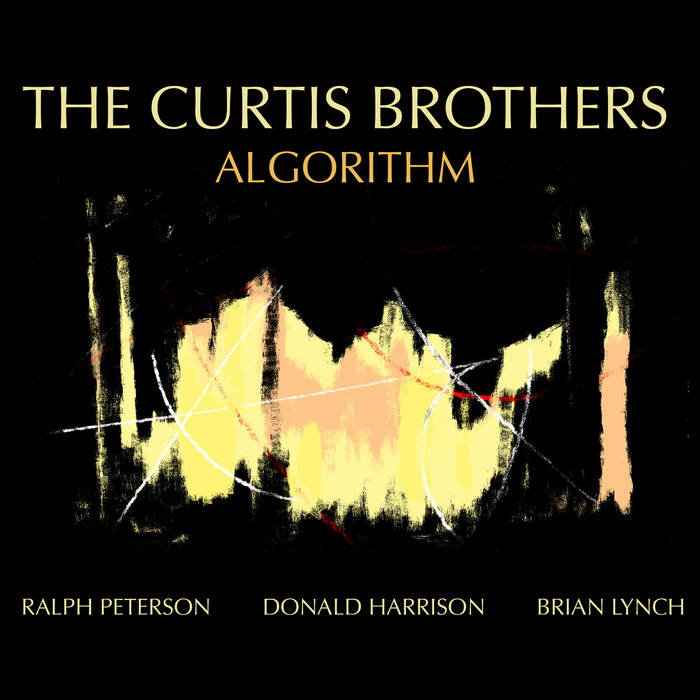 While attempting to fuse mathematical ideas with the soul, "Algorithm" was written, with the sound of The Curtis Brothers Band in mind. In some ways, "Algorithm", could be viewed as the sequel to the first release from The Curtis Brothers Band, "Completion of Proof", while still built in the spirit of the great Art Blakey and his "Jazz Messengers".

I feel "Algorithm" is best described in chapters. Each chapter is titled after a mathematical concept or term, with the exception of the chapters that are presented as tributes to The Curtis Brothers' mentors. Those chapters are "narrated" by the great Donald Harrison, Brian Lynch and Ralph Peterson respectively, three musicians who have helped to make The Curtis Brothers who they are today.

The first chapter, "Three Points and a Sphere", addresses The Curtis Brothers' beginnings in Hartford, Connecticut, paying homage to Jackie and Dollie McLean's important contributions, with a nod to the logo of The Artists Collective, Inc. The Artists Collective, Inc. is one of several schools that The Curtis Brothers attended in their youth, as part of their early musical development.

Chapter Two, "Phi", is a nod to the golden ratio, a special number that many living things abide by, in order to grow and develop. Many artists use this concept in their work, to bring beauty into their creation. I incorporate a New Orleans-based rhythm, which was made famous in the "jazz" world by pianist Ahmad Jamal, through his interpretation of the composition "Poinciana".

Chapter Three, titled "Chief", features The Curtis Brothers' earliest mentor and touring band leader in the professional world, "Big Chief" Donald Harrison, Jr., who tells an amazing story throughout the entirety of the composition in question.

Chapter Four is an "Afro-Cuban Jazz" composition, which emphasizes a strong focus on syncopation with "bebop" influences. It is titled "Parametric", so as to address the natural rules that shape all of us.

Chapter Five was written in a 3/4 time signature, and is titled "Torus", which is an object that conceptually offers interesting ideas, when its mathematics are addressed by the arts. Many artists, like M.C. Escher, have played with mathematical ideas that bend the governing parameters of our physical reality. Specifically, his work influenced by the "mobius strip" comes to mind. Research on the "Torus" has always been fascinating to me.

Chapter Six, titled "The Professor", is a feature for Brian Lynch, who crafts an equally incredible tale throughout the entire composition.

Chapter Seven is the musical sequel to "Manifest Destiny", a composition from the aforementioned first Curtis Brothers recording, "Completion of Proof". We use a musical concept we learned from Art Blakey's Jazz Messengers, where Reggie Workman's non-walking bass line was combined with Blakey's swing, in order to create a counterbalance. Over the years, Ralph Peterson has honed this sound with us, and we use it many times throughout the chapters of "Algorithm". We named this "Undefined", after the surprising result you get from a calculator when dividing any number by zero.

Chapter Eight is titled "Staircase of Mount Meru", paying tribute to Indian mathematician Pingala, for being the earliest source of reference for what is commonly known as "Pascal's Triangle".

Chapter Nine is titled "Sensei". and is a showcase for Ralph Peterson, who chronicles his fascinating journey within life and music throughout this entire composition.

A final thought on this project is that the title of the album as a whole, "Algorithm", is a nod to Algoritmi, the Persian (Iranian) mathematician, Muhammad ibn Musa al-Khwarizmi. This up-tempo composition addresses the many elements of "jazz" communication, which occur between the rhythm and horn sections respectively.

Thank You to Karina, Zeni and Phineas Curtis, Ken Kitchings and everyone at The Side Door Jazz Club, Mom, Dad and The Curtis Family, The New London Curtis Clan, Jan Mullen, Joe Chandler, Julie Acosta, Adagio Curtis and Matt Chasen for your support!

Special Thanks to Ralph Peterson, Donald Harrison and Brian Lynch for being there for us from the beginning; Mike DiRubbo for coming in and nailing the music on the second night at The Side Door Jazz Club; Josh Lawrence, Mark Whitfield, Jr. and Nick Biello for workshopping this music and to Daniel Simms for road managing this project and recording.

Extra Special Thanks to Chamber Music America: New Jazz Works Grant, The Side Door Jazz Club for helping to make this happen and to Edward J. LaRose for helping to lay the foundation of this recording.