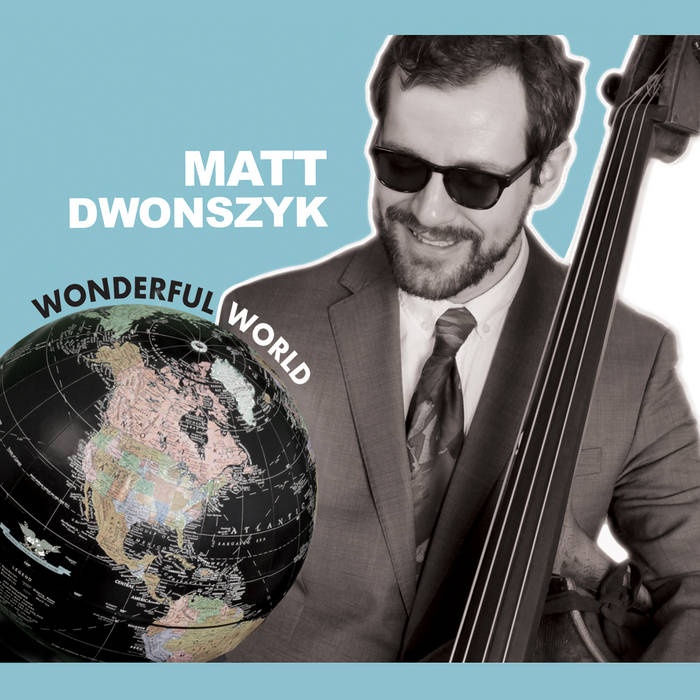 The tradition of the double bass and bass guitar respectively in Hartford, Connecticut is exceptionally strong. Pillars of these instruments, such as Paul "P.B." Brown and Nat Reeves, have laid a framework for successive generations to follow. The leader of the record that you are about to listen to, or may already be listening to, is a resounding and worthy member of the aforementioned lineage of bassists to come out of Hartford. For those unfamiliar, his name is Matt Dwonszyk.

A native of suburban Rocky Hill, Connecticut, half of Matt's day throughout his high school years was spent at The Greater Hartford Academy of the Arts, where he was introduced to jazz. Matt was soon encouraged to join The Artists Collective, Inc.'s Youth Jazz Orchestra, under the direction of saxophonist and multi-woodwind instrumentalist Rene McLean.

The Collective led Matt to continue his studies within The Jackie McLean Institute of Jazz at The University of Hartford, a program, which akin to the aforementioned Artists Collective, Inc., was founded by saxophone legend Jackie McLean.

Dwonszyk quickly developed an exceptionally strong rapport with his studio instructor therein, Nat Reeves. Professor Reeves, an icon on his instrument within the "jazz" realm and beyond, instilled a strong sense of swing, conviction, phrasing, time, pulse, beat and vocabulary upon Matt. Graduating with Bachelor's of Music in Jazz Studies in 2013, Matt went on to obtain a Master's of Music in Jazz Performance at Purchase College (SUNY) in 2015.

On "Wonderful World", his debut album, Dwonszyk has brought together a wealth of talent, which is predominantly made up of former classmates from the previously noted Jackie McLean Institute of Jazz, including trumpeter Joshua Bruneau, tenor saxophonist Jovan Alexandre, guitarist Andrew Renfroe, pianist Taber Gable, drummer Jonathan Barber and vocalist Shenel Johns. Matt was also able to include several elders, including "Hartford legends", such as percussionist and vibraphonist Ed Fast, percussionist Jorge Fuentes and "world renown" trombonist Steve Davis.

Matt Dwonszyk is a name that you are going to be hearing with ever increasing frequency, and for some time to come. In so doing, I sincerely hope that you're not only able to develop a love for his music and musicianship, but that you have the opportunity to meet him in-person. As one who was known him for some time now, I can say with absolute certainty that Dwonszyk's playing is a direct reflection of the love, joy camaraderie and generosity with which he leads each and every day of his life. The future holds an abundance of success and triumphs for Matt Dwonszyk, who at the time of this writing is a mere 28 years old.

We see you, Brother Matt!

Insights on the music herein from Matt Dwonszyk himself:

"1.) ‘Pecan’s Delight (for Sherman and Sharon)’- I wrote this song in college. It’s named after my mother’s pecan pie, which is fantastic! It pays tribute to her for having me, raising me and always supporting me in everything that I’ve done, including my musical career and this project.

2.) ‘The Academy’- was written for CREC Greater Hartford Academy of the Arts, where I was exposed to ‘jazz’ music.

3.) ‘Theodicy’- This is a philosophical term, which basically asks the question “If there is an Almighty God, why does he/she let bad things happen?” This is a reflection on the world and the painful things that it sometimes brings.

4.) My Soul- This is a hymn that Shenel sings. As the final track on the album, it speaks to the fact that despite the challenges that life brings to me, my soul is well and I will continue onward.”

5.) ‘Weak Incentive’- This song’s title is a little random, but for some reason I liked it. I suppose you could look at it as a manifestation of being affected by the world’s negatives to the point of losing optimism and hope. We all go through difficult periods where we can feel this way, resulting in a weak incentive towards different aspects of life.

6.) ‘A Year and A Day’- This song is a ballad written for my father, who passed away in 2009. I wrote the tune a year after his death, reflecting on how fast a year goes by, and how precious time is.

8.) 'Dr. Dwonz' - I am EXTREMELY humbled to say that this song serves as pianist Taber Gable's tribute to me, and utilizes a nickname, which I picked up during my time at The Hartt School, 'Dr. Dwonz', on account of my initials, 'M.D.', which normally refer to a medical doctor.

9.) ‘Prospect Park’- This song was written for where I currently live in Brooklyn. The apartment is very close to Prospect Park, a destination which I frequent when I can feel the struggles of life getting to me.

10.) ‘Cuban Breeze’- This title comes from the drink of the same name. It has a ‘Latin’ tinge, and a very open sounding melody and accompanying chordal structure, which hopefully captures a feeling of ‘the breeze’.

11.) ‘Irene’- This piece was written for a storm that happened years ago called Hurricane Irene. It is a reflection on mother nature’s strength and power.

12.) ‘What a Wonderful World’- This is the title track. It is an arrangement of the classic standard, which I crafted in a more ‘modern jazz’ style. It speaks to the fact that the world is struggling in many ways today, but it is still wonderful too. One of the main ways it’s wonderful for me is music, and being able to play and compose, while forging relationships with musicians and listeners alike. That is something that I’m truly grateful for. I believe that this message resonates with everyone and speaks to the concept of one human family.

Matt Dwonszyk recalls how in 2018, he was asked by a patron at a performance on which he was the bandleader, if he had any CDs for sale, to which he had to reply, "Not at the moment, but a project is in the works."

Dwonszyk knew that he wanted to assemble the musicians featured on the album, in a band that came to be known as “The Dwonztet”. When he was given the opportunity to bring an ensemble into Dizzy’s Club within Jazz at Lincoln Center, in order to host the “Late Night Set” for an entire week in May of 2018, he seized the moment and “workshopped” the music that you will hear on “Wonderful World”.

Matt is a PROLIFIC composer, and the most difficult task was deciding which pieces to include within the initial repertoire of “The Dwonztet”, which would ultimately be featured on his DEBUT recording, versus what would be left in the coffers for future efforts. Following the final day of his week long run at Dizzy's Club, Matt Dwonszyk booked studio time at the INFAMOUS Tom Tedesco’s studio in Paramus, New Jersey.

Brother Matt is a FIRM believer in and subscriber to the lineage, legacy and DYNASTIC “musical universe” that is Hartford, Connecticut. Having attended The Greater Hartford Academy of the Arts, The Artists Collective, Inc. and The Jackie McLean Institute of Jazz within The University of Hartford’s Hartt School, Matt made the obvious choice to build a band around the talent that had both preceded and joined him during his time at the three aforementioned educational institutions.

The dynamic that exists between the musicians herein is that of a family, from the very first notes of “Pecan’s Delight”, the opening track on the album. From bass LEGEND Paul H Brown to alto saxophone PHENOM Jackie McLean, the roots, foundation and framework that make a Hartford, Connecticut musician, particularly within the so-called “jazz” idiom, what he or she is, can ALL be seen laid bare within the content of “Wonderful World”. The love, compassion, camaraderie, fire, unity, sense of community, desire to propel one another that much further forward and the common goal of moving the populace at large through one’s artistry is shared by Misters Bruneau, Alexandre, Davis, Renfroe, Gable, Dwonszyk, Barber, Fast and Fuentes along with Miss Johns.

Matt Dwonszyk is EXCEPTIONALLY candid about how enjoyable, relaxed and just downright FUN the recording process taken on over two days at the previously noted Tom Tedesco’s studio truly was.

I'd like to thank my mother, Christinam and my brother, Joe, for always being there for me!

Thank you to al of the musicians who played on this record, and continue to share so much knowledge with me!

Thank you to Norman Johnson for your friendship, and for bringing this record to life!

Thank you to June Bisantz and Harrison Judd for the amazing photos and album design!

I'd like to dedicate this record to the late Mike Dwonszyk.

Recorded May 27th (Memorial Day) and May 28th, 2018 at Tedesco Studios in Paramus, New Jersey

Mixed and Mastered by Norman Johnson