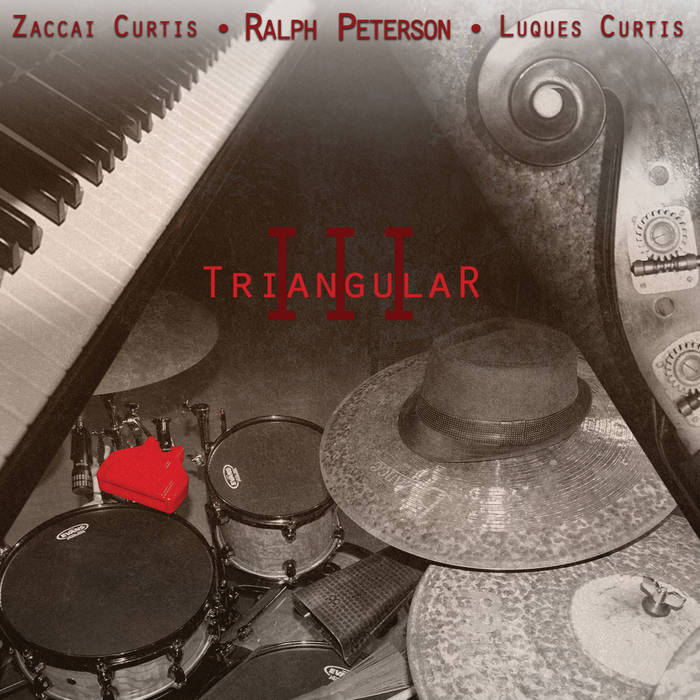 Rands One of the best jazz albums of 2016! Favorite track: Beatrice.

Album Serves as Testament to the  Healing Power of Music


A great sequel is a rarity worth waiting for. Drummer/composer Ralph Peterson returns to the trio format for only the third time in 30 years on TriAngular III, due out April 8 via Peterson’s own Onyx Music label and Truth Revolution Records and. This time out he’s joined by brothers Zaccai and Luques Curtis on piano and bass, adding a new incarnation to the prestigious TriAngular lineage.

Recorded live at New Haven’s Firehouse 12, TriAngular III provides not only a showcase for Peterson’s boundless energy and imagination, but also a testament to the healing power of music. The album was recorded, mixed and mastered as Peterson was being diagnosed and treated for colorectal cancer, becoming a sterling symbol of his successful battle against the disease.

Cancer is not the only health challenge that music has helped to usher Peterson through. TriAngular III will be released just days before the drummer marks a landmark 20 years drink and drug free. “I’m now approaching the balance where I’ve been clean longer than I ever used,” he says, “and that’s a powerful example of what is possible through faith. It shows the restorative and healing power of the music to move you through situations in life that can be challenging.”

Given the evidence of the music contained herein, which bristles with electric interplay and abundant joy, Ralph Peterson has plenty of life and music left in him. The album is a fitting successor to its two predecessors: 1988’s Triangular with Geri Allen and Essiet Essiet, and 2000’s Triangular 2 with David Kikoski and Gerald Cannon.

“The trio is one of the purest vehicles for expression in this music,” Peterson says. “With the right players you can sound like an orchestra.”

Peterson is particularly proud of the line-up for this outing, as Luques Curtis was a student of the drummer’s at Berklee College of Music and he’s therefore known both brothers for nearly half their lives. “Our families have adopted each other,” he says. “The fact that they’re brothers makes them seem telepathic at times, and I think of them as my brothers. These two guys never rest on their laurels. They’re always pushing the music forward, they’re always trying to get something different out of it, and that’s good for me as I get older.”

So enamored with the Curtis brothers is Peterson that he’s releasing TriAngular III as a co-production between his Onyx Music imprint and their Truth Revolution Records label. And unlike the previous one-off TriAngular line-ups, he foresees this one continuing on for the foreseeable future. “In these times of guerrilla entrepreneurship, I think it may be a smart maneuver for artists to work together to expand each other’s audiences,” he says. “I’m impressed by their business acumen and their willingness to have a vision that’s not myopic. I think this particular version of TriAngular will hold together for a number of years.”

TriAngular III is also the unofficial third entry in another trio; although it’s not titled ALIVE 3, it marks the third recording that Peterson has made at Firehouse 12, which he praises as “an extremely intimate space. The fact that it was a firehouse that became a recording studio that became a tapas bar that decided to use their studio space to present live music is a rather unique evolution. It’s not a gig you do to retire on; it’s a gig that you do to share your music with a particularly appreciative musical community. And the Curtis Brothers are from Connecticut, so it’s always a homecoming celebration.”

Peterson brings his career full circle on TriAngular III by including three compositions by the late pianist Walter Davis, Jr., the drummer’s earliest mentor and employer. “Uranus” kicks off the album with enthusiastic precision, “Backgammon” is brisk and playful, while the cautiously hopeful “400 Years Ago Tomorrow,” introduced by a compelling Luques solo and containing a jaw-dropping spotlight for the leader, unfolds with sweeping drama and a gospel accent.

“If we forget where we come from, we lose track of where we’re going,” Peterson says of Davis. “I’m of the age now that Walter was when I met him, and it is important for me to express my gratitude by doing for young musicians what Walter did for me. That’s simply to try to inspire them, not in spite of but because of what I’m going through.”

Saxophone legend Joe Henderson is another longtime inspiration paid homage, through a relaxed take on Sam Rivers’ “Beatrice,” a tune strongly associated with Henderson, and a unique Afro-Cuban arrangement of the saxophonist’s trademark, “Inner Urge.” The repertoire also includes the classic standard “Skylark,” an opportunity for the trio to show off its tender side.

The album is rounded out by several originals: the Curtis brothers contribute the brooding “Manifest Destiny” and the gorgeously airy “Moments,” a song that Peterson calls, “amazingly delicate and nuanced and sensual, the kind of song that ends up in my head for the rest of the day.” The leader himself reprises his steely “The Art of War” and closes the album with “Blues for Chooch,” titled after his own childhood nickname. “I used to be embarrassed when my parents would yell that across the club at Sweet Basil to get my attention, but eventually you become comfortable with all aspects of who you are.”

If Peterson’s job is, as he puts it, “to protect this national treasure we call jazz,” he’s in a unique position to do just that. At 53, he can look back on legendary mentors like Art Blakey and Elvin Jones as well as fruitful collaborations with greats like Terence Blanchard, Branford Marsalis, David Murray, Roy Hargrove, Michael Brecker, and Betty Carter, not to mention a notable career as a respected educator. While his health challenges are no doubt formidable, a friend summed it up well when Peterson remarked that he wasn’t quite out of the woods yet. “Maybe not,” he replied, “but it looks like you’re holding the axe.”

Serving the Finest in Jazz Since 1988

Information and press materials (including album covers, promotional photos
and bios) on all DL Media artists can be found at our website: dlmediamusic.com

MF DOOM is given his flowers, plus appearances from MC Jada Imani and Stanley Ipkuss